When things go wrong as they sometimes will,
When the road you're trudging seems all uphill.
When the funds are low and the debts are high,
And you want to smile, but you have to sigh.
When care is pressing you down a bit,
Rest if you must, but don't you quit. 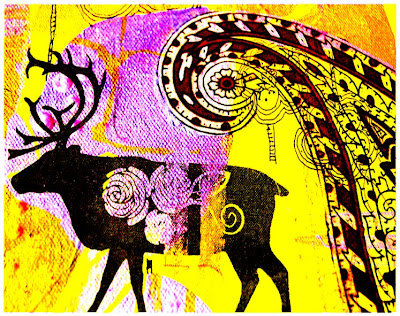 Life is queer with its twists and turns,
As everyone of us sometimes learns.
And many a fellow turns about,
When he might have won had he stuck it out.
Don't give up though the pace seems slow,
You may succeed with another blow.
Often the goal is nearer than
It seems to a faint and faltering man.
Often the struggler has given up,
When he might have captured the victor's cup.
And he learned too late when the night came down,
How close he was to the golden crown.
Success is failure turned inside out,
The silver tint of the clouds of doubt.
And you never can tell how close you are,
It may be near when it seems afar.
So stick to the fight when you're hardest hit,
It's when things seem worst that you mustn't quit.
Anonymous

Popular posts from this blog

March 31, 2012
I received quite lots of enquires asking me the different between Kettle and Coptic Stitch Binding. Many participants wanted to learn the best stitch, but for me both have special character of its own. It was like comparing 2 different skill. Here I would like to share some infos and pictures with all of you. I hope you will find some fact useful as your guide: KETTLE STITCH BINDING Kettle Stitch Binding Kettle stitch's roots lie in Medieval times. According to Dictionary.com, the kettle stitch is "(in hand sewing) a knot tied in the thread that links one section to the next." Kettle stitching looks like a series of knots joined together in a row. It required section/signature means a combination 3-5 sheets of paper being fold in order to create one section. The name itself  are referring to the stitch that links one section/signature to the next (head & tail) and start at beginning of 3rd signature, continuously till the end. The term may be adaption of
5 comments
Read more

March 02, 2012
Despite of having problem with sewing machine I managed to deliver this very special book of Paul & Sam "Our Adventure Book". I hope they will happy with the outcome. Travel far far away to California, to be used as a wedding guest book and will be loaded up with pictures, love and happy stories.
6 comments
Read more

Little Syam
Kuala Lumpur, Malaysia
HELLO THERE! This page is to share my daily activities and the creative process that I went through. I am very passionate of the art of book binding and I also love to create a craft product which I hope that everyone could relate to. Each of art and craft under Little Syam are made from labour of love inspired by nature, travel, childhood and it's purely based on personal expression. Besides art and craft Little Syam is also experience in conducting various workshops for an adult and children with vast clients from corporate, students and individual. Appreciate you could ask a permission of any pictures you wish to use. Contact us at littlesyam@gmail.com. Thanks for drop by & have a wonderful day //syam